In want was arguably the clubs most successful period being known throughout Ireland, we competed in the 1901 Leinster Final (Played two years later in 1903), two years after our first Leinster Final victory in 1901. Also previous to this, what is little known Blackwater had 5 members on 1891 Crossabeg team that won Leinster and reached the All Ireland Final. This time in 1903, the club added a few players from neighbouring parishes to bolster the starting seventeen and after successfully defeating a  resolute Kilkenny team after three matches we were drawn to play King County (Laois) in May 1903. The GAA were so confident of a Blackwater victory that the All Ireland Semi against a team from Ulster was played two weeks before this.

The match was fixed for Kilkenny with the paper giving out in the semis that the Blackwater team werent wearing the new Wexford Jerseys that were brought for them. Blackwater tended to wear there white shirts and a mixture of a black and amber cap while also sometime playing in bare feet, giving them an unusual appearance even for these times. James Furlong (Captain) won the toss and played with the breeze. The men of green and gold had the Laois team under pressure from the off with Michael Cummins of Ballymurn putting in a specially talented performance with his long drives. At the turn Blackwater led 5-02 to 0-02 with the second period following the same vain with Crean scoring another goal near the end to win out the day. The final score being Wexford (Blackwater) 7-07 v 1-03 Kings County.

Some of names above would have relation’s on this weekends team, Moses O’Brien, related to the Carrolls, Byrnes of Garryvadden to current member Mikey Byrne, Tom Cullen, Dinny Corrigan grandfather of the current manager Ger Corrigan and great grandfather of Din Carroll, etc. On Sunday it is another long trip for our men further than Kilkenny, this time Limerick, best of luck to all the team and mentors. 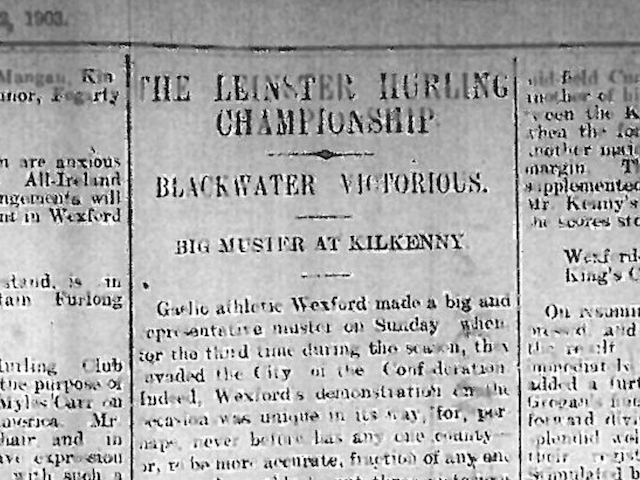