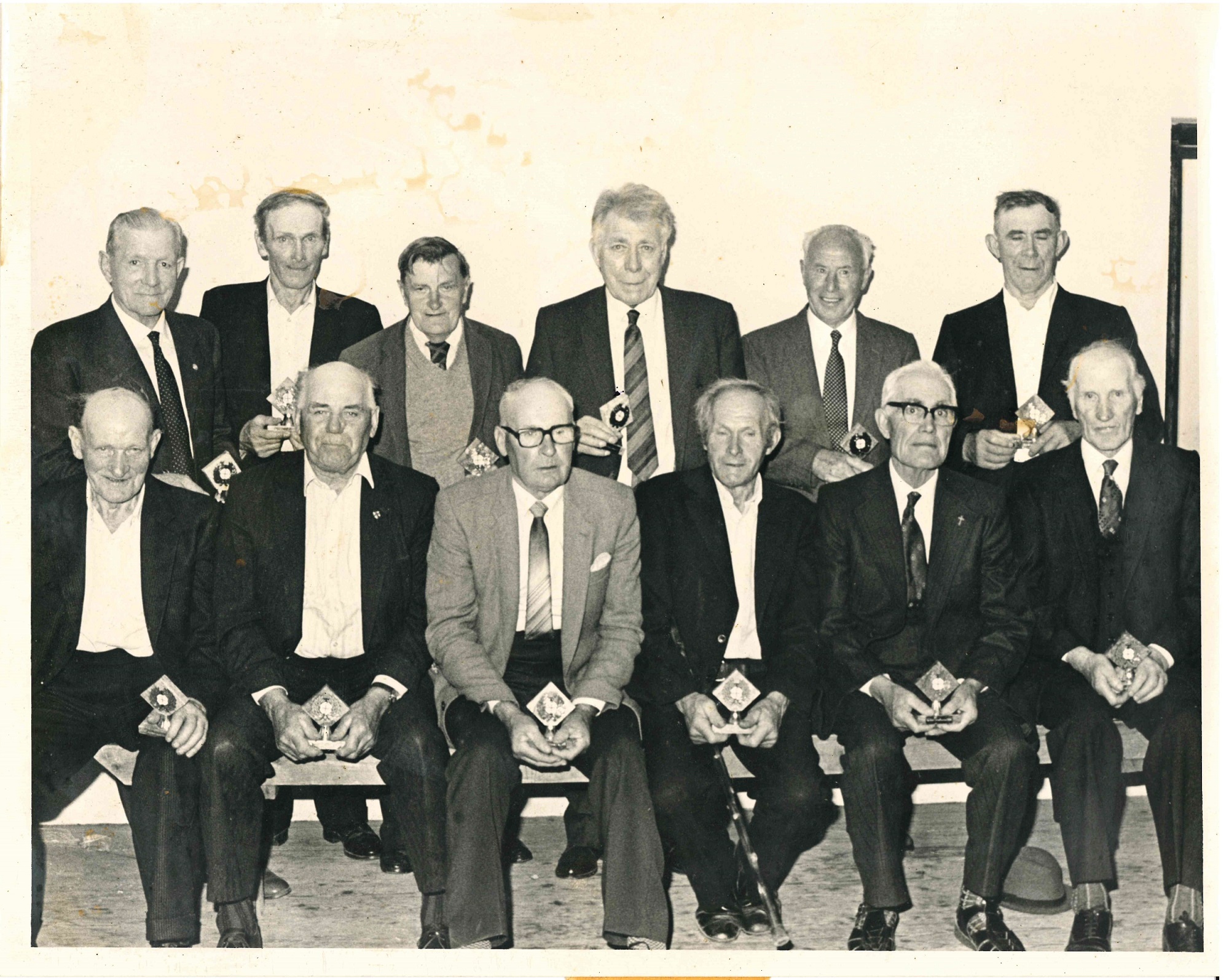 In anticipation for the game Sunday, we can look back at the last time two Blackwater teams from the parish met in Championship action. The year was 1936, a year of some interesting goings on, the year started on a sad note with the death of Fr. Forrestal, a previous player for Blackwater, passing at the age of just 27 having played at full back in the 1931 county final loss to Geraldine O’Hanrahans. Early on in the year, an attempt to set up a primary schools league, a pre curser to the Rackard League, with both Blackwater schools entering Blackwater and Ballyvaldon. Also a memorial was unveiled to the Leacy brothers from Blackwater, of Irish Independence fame and the women of the parish made an attempt to set up a camogie club.

Two teams represented the parish around this time, Toberlamina Fenians and St.Brigids and it was decided at the first meeting to have just one team, to change the name from the Fenians to Blackwater St. Brigids and more importantly to have two junior hurling teams. Thomas Murphy (owner of the Imperial Hotel, Wexford) was elected chairman this year, (incidentally, a relation of his is the currently club chairman Owen Murphy), while Thomas Corrigan was secretary and Matt Murphy, The Moate was treasurer.  When the draw was conducted in March of that year for the Enniscorthy District Championship, an interesting draw was made, Blackwater A v Blackwater B. 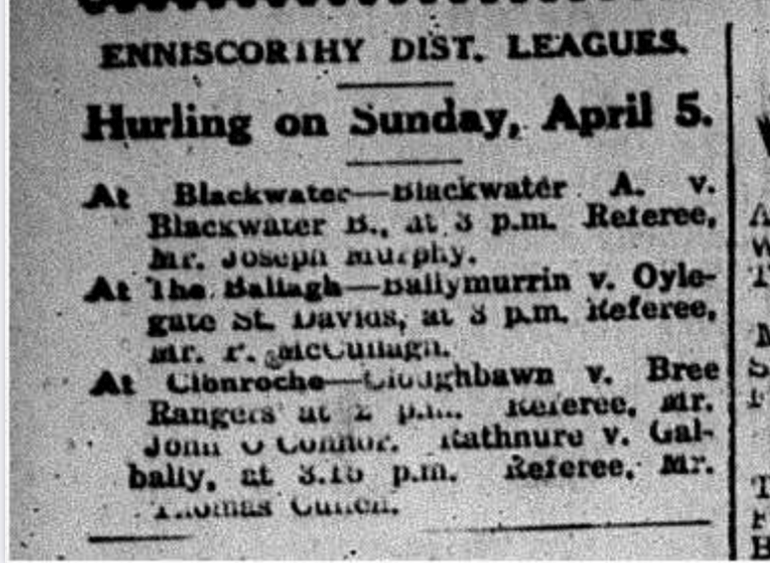 The local echo paper had a match preview

A clash of the ash that might prove to be the greatest exhibition of hurling yet witnessed in the Enniscorthy championship will take place in Blackwater on the hurling green on Sunday between Blackwater A and Blackwater B, better known as the Fenians and The Unyoke. Both teams have trained hard for the big event. The Unyoke team is specially brought out by one of the famous 1910 all ireland men in the person of Mr. Jack Leary.

The paper the following week had the match report.

Known better as the Fenians and the Unyoke, Blackwater A and B teams had a great clash at home on Sunday in the Enniscorthy District. There was a fine crowd of spectators present showing that Blackwater folk have yet retained a keen interest in the game.

Fast accurate hurling was the order, no quarter given or asked for. The Unyoke (B team) had a two point lead at half time but lost by 5-01 to 2-01. K Murphy, M Byrne, J Roche and J Foley were best for the winners with Mossy Nolan (Woodlands footballer), Pat Lacey goal, Tom Whelan, Seam Brien and Jim Roche doing well for the losers. The referee was ‘Wee’ Jow Murphy (Ballagh HC) was the best feature of the game.

It would go on to be a famous year for Blackwater, as the junior team would win the Junior Hurling Championship. The following year, Blackwater entered three teams in the championship, one senior and two junior, with yet again the junior teams drawn against each other again. This time though, the B team were unable to field a team for the contest and withdrew. 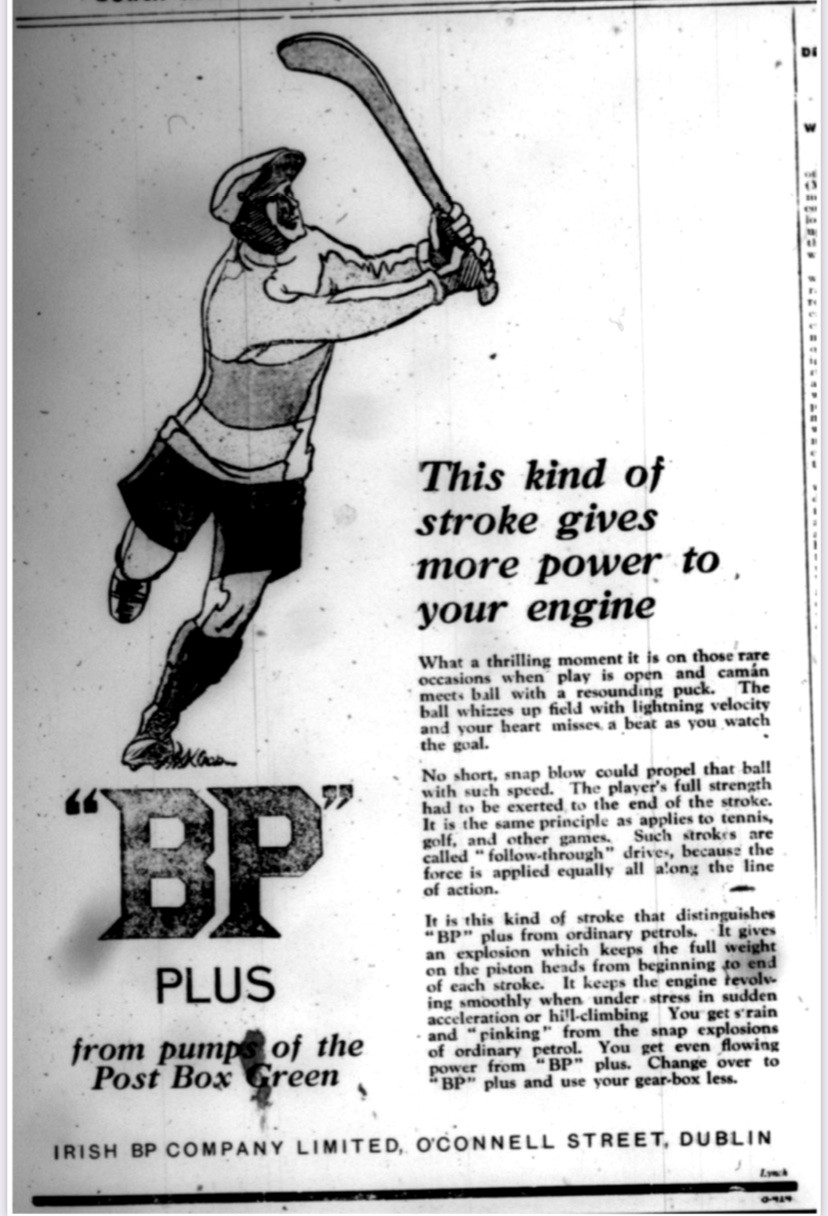