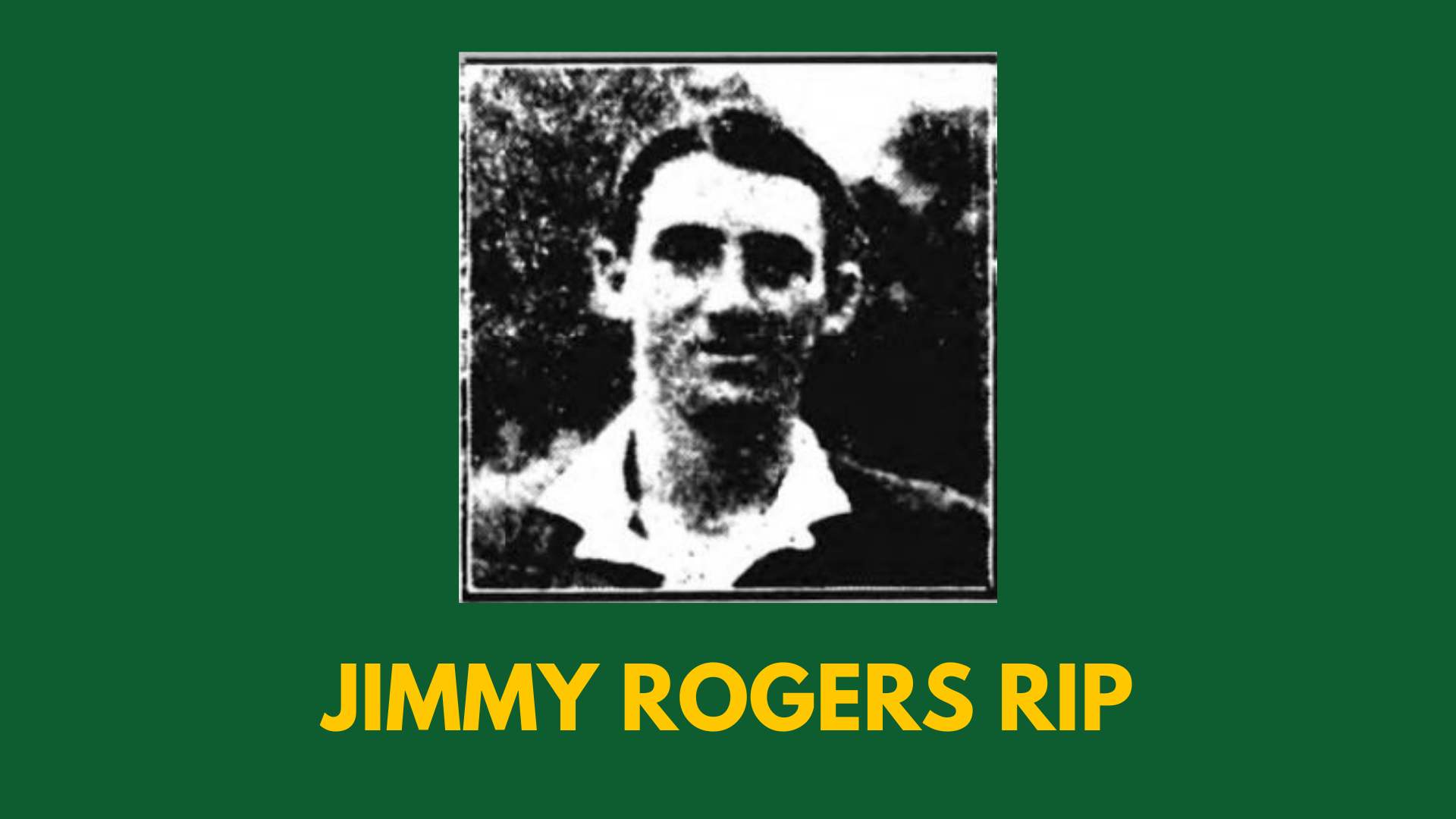 We are sad to report on the death of former Blackwater and Wexford player Jim Rogers who passed away in Shannonbridge, Co. Offaly on Friday 20th November. While most of the younger folk in the club might not have heard of him, he played for the club between the years of 1948 to 1952 having been transferred as a guard here while he also played football for Wexford. It was often said by people who saw him play as one of the best dual players ever to wear the green and gold.

In his first game for Blackwater in 1948 against Castlebridge in the first round of the junior football tie, even though Blackwater were defeated, it was said in the People paper that he was the most outstanding player on the field.

In 1950 he lined out for the Wexford footballers against Meath in the National League and the paper reported on the game:

‘For an unsurpassed display, full honours go to the dashing fair-haired Garda Jimmy Rogers, whose brilliant performance thrilled not alone his Blackwater admirers but the entire attendance, he was indeed in his element and was mainly instrumental for Wexford’s monopoly of the exchanges at centre field”.

Later that year he was once again instrumental in Blackwaters victory over Ballymitty in the Wexford District Junior Championship semi final. Unfortunately he was on the losing side in the country semi final defeat by Commercials, scoring 3 points.

In 1952, he was made captain of the Blackwater hurling team and in February of that year he was selected to play midfield on the Leinster Football team on St. Patricks Day in the Railway Cup final against Munster. Early this year, Blackwater were again in District final action against St. Marys Rosslare which we were victorious winning 4-07 to 3-01. The game was noted as being extremely rough. From the Wexford people

“Garda Jimmy Rogers in action for Blackwater, played a mans part in keeping law and order and prevented quite a few scraps developing. The referee too came in for some chin wagging and abuse. Writing of Jimmy Rogers reminds me that he will form the Leinster midfield with D. Taafe in the Railway Cup final on St. Patricks Day, the only Wexford player thus honoured.

Blackwater reached the county junior hurling final in May of this year but unfortunately Jim again was on the losing side, the paper stating that Rogers stood out under pressure. Jimmy was transferred to Finglass, Dublin in early 1953 and the club made a special presentation to him, giving him a dressing case which was engraved. Thomas Walsh vice president of the club paid a tribute to him thanking him for his work with the club. Jimmy thanked the members of the club by stating that they had left an impression on him that would never leave his mind.and he would cherish for ever the happy days he spent with a team and club proud of their tradition on the gaelic field.

He did give an interview later that year to the Irish Press, lamenting that football wasnt more popular in the area stating

“So bad was the hurling craze there that I couldnt get anyone to kick a football with me, not even the young lads would join me for a bit of kicking”.

Luckily for Blackwater, even though football wasnt that popular, he certainly made an impression on the hurling field. The club sends its condolences to his family at this sad time, ar dheis De go raibh a anam . Funeral details: https://rip.ie/death-notice/jim-rogers-shannonbridge-offaly/439828