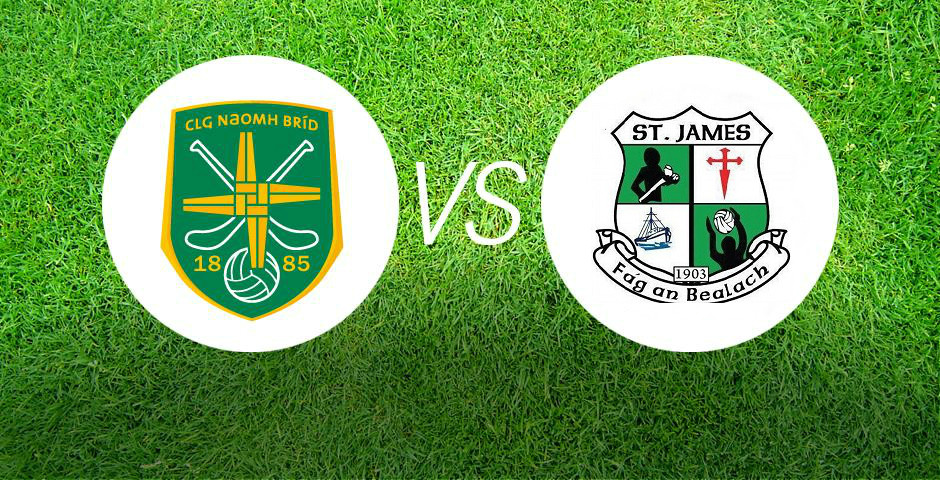 Luckily it wasn’t a repeat of last year as our intermediate team defeated St. James Ramsgrange in round 4 of the championship which leaves the boys third in the table on the cusp of qualification.

James played with the strong wind in the first half and came quickly out of the blocks, leading 1-2 to no score after seven minutes. Dean finally had us on the board after 10 minutes from a placed ball while he scored another free a few minutes later. On 16 minutes, a James player saw red after pulling high across Dean Wright and he scored the resulting free to bring it back to 3. The three point margin continued up until half time, after further scores from Mossy and Dean Wright frees.

We started the second half well, dominating possession but couldn’t get the required scores on the board. Wright scored in the first minute but it wasn’t until the 10th minute that we got a further score from Shane. There was a killer below on 42 minutes when James worked a short puc out upfield and broke through to strike to the net. They scored a free a minute later to leave us 5 behind and in need of a big final 15 minutes. Two Dean frees and then a Shane point had the game back to 2 before the Jimmies and Mick traded points. We continued to hold onto possession but couldn’t make it count until the final few minutes. A Wright free brought it back to a minimum before James played a short puc out with Mossy putting pressure on the back who fumbled it, the ball broke to Seanie who still had a bit of work to do, soloing in and finishing low to the keepers right, nestling in the bottom corner. A Wright free had us leading by 3 before a James free just creeped over Peters bar heading into injury time. Another wright free left a nervy finish but the lads controlled the final few minutes to see out the game.